MOSCOW – Belarus’ President Alexander Lukashenko has won a sixth term in office with a landslide of over 80% of the vote, the country’s election commission announced Monday.

Voter turnout in Sunday’s polls was over 84%, and the results of the election are considered “valid,” Lidia Ermoshina, head of the Central Election Commission, told reporters in the capital Minsk.

Although the results are preliminary, Ermoshina said she did not expect there would be a significant change after the final tally.

But opposition candidates protested the results, supported by thousands who took to the streets nationwide demanding a fair election.

The protesters raised their voices against Lukashenko’s rule, his prolonged stay in power – he has been in office since 1994, and lifted the two-term limit in 2004 – as well as the weak economy and poor handling of the coronavirus situation.

The opposition says 213 people were arrested at demonstrations Sunday night in the cities of Mogilyov, Vitebsk, Brest, Grodno, Novopolatsk, with police using rubber bullets and sound grenades to disperse rallies.

One man was allegedly killed during the protests, a claim denied by the Belarusian Interior Ministry.

Meanwhile, Lukashenko started to receive congratulations on his new term.

Without issuing congratulations, Volodymyr Zelensky, the president of neighboring Ukraine, made a statement calling on authorities to exercise “maximum tolerance,” saying: “Belarusians are going through difficult times now trying to determine the vector of their further development.”

“Ukraine and I are personally highly interested in Belarus being a truly independent and democratic country with a strong economy and stable social relations,” Zelensky added. 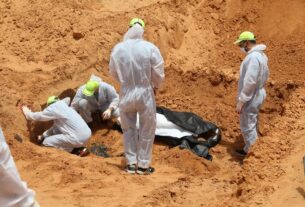