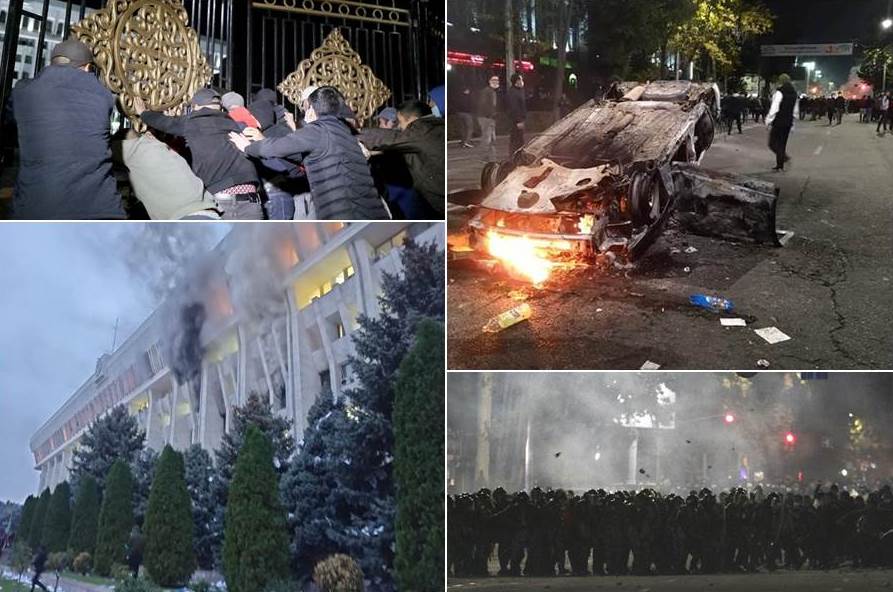 Protesters seized Kyrgyzstan’s seat of government and freed a jailed former president on Tuesday after demonstrations against an election marred by vote-buying accusations spiralled into violent clashes with police.

Opposition supporters hit the streets of the capital Bishkek the previous evening to demand the resignation of pro-Russian President Sooronbay Jeenbekov and a rerun of Sunday’s poll. 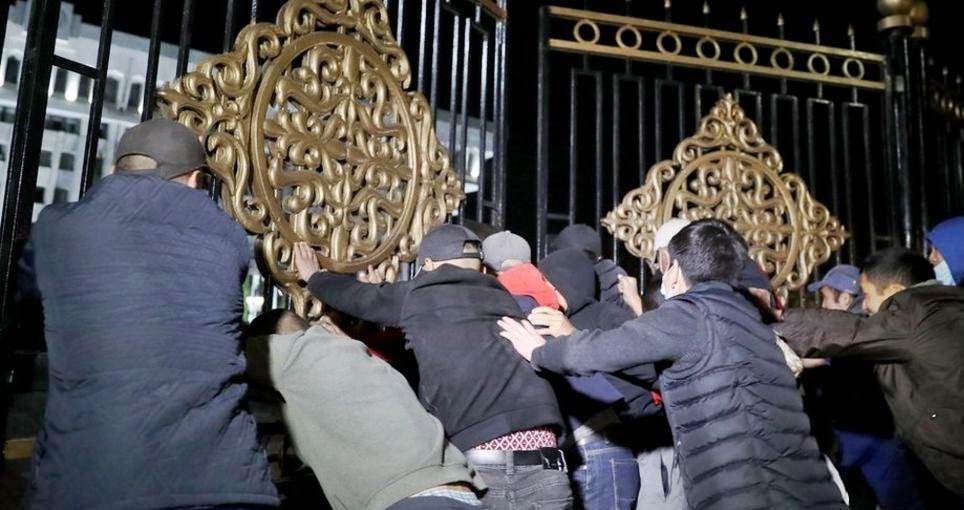 Supporters of 12 political parties that reportedly failed to exceed the 7% threshold set by the Central Election Commission for entry into parliament staged a protest in Ala-Too Square in the capital, demanding that the election results be cancelled.

Demonstrators drove trucks toward the police, who retreated, and the protesters occupied the presidential palace and interior of the parliament building.

Over 100 people have been reportedly injured so far. 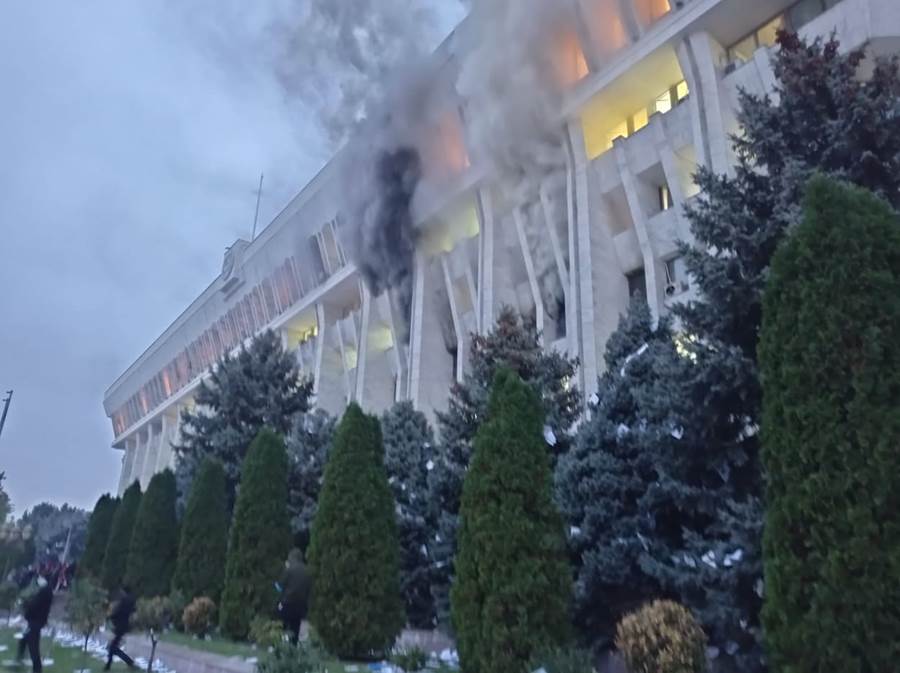 While some of the demonstrators remained at the presidential palace, others moved towards Ala-Too Square and a prison where political prisoners are held.

The demonstrators reportedly freed former President Almazbek Atambayev from the prison, which they occupied. 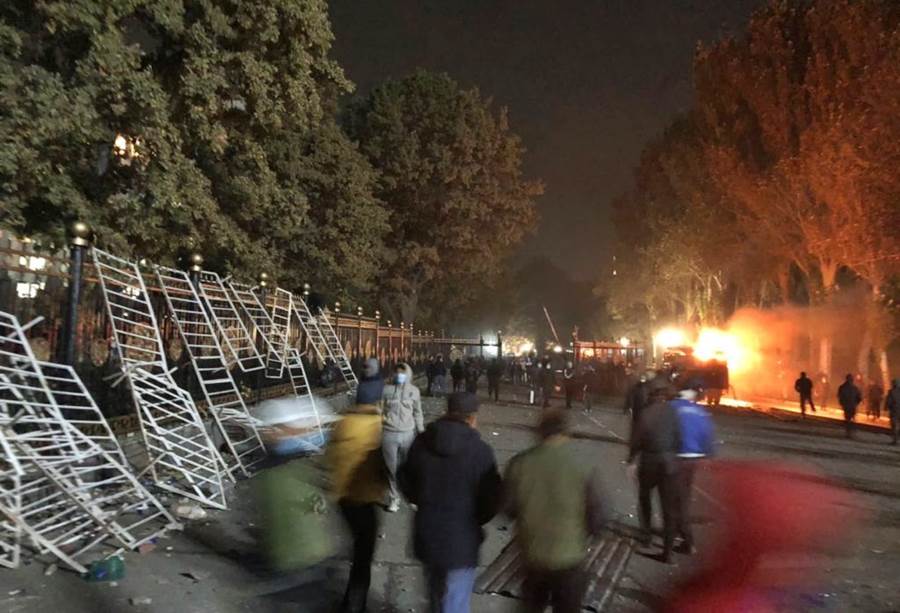 After midnight, the demonstrators headed to the detention center of the State Committee for National Security — where Atambayev was held — which is located close to the presidential palace.

After engaging in a brawl in front of the committee and breaking the entrance gates, the demonstrators stormed the building and released their ex-president.

Atambayev, who was taken out in a crowd and got into a car, is expected to address thousands of people waiting for him in Ala-Too Square. 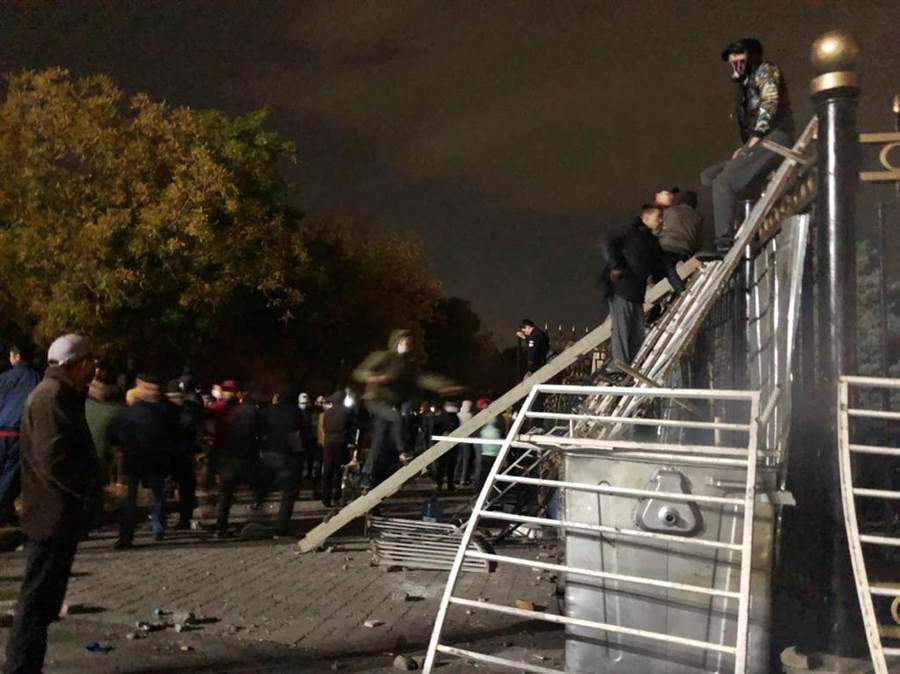 Footage posted on social media showed Atambayev, 64, greeting supporters after he left jail, where he was serving an 11-year sentence for his role in the illegal release of a mob boss.

Atambayev was once close with his successor Jeenbekov, but the pair fell out shortly after the 61-year-old won the country’s last presidential election in 2017.

Both men are viewed as loyal allies of Russia, whose strategic position in the country is likely to remain unaffected despite the unrest.

Russian leader Vladimir Putin tried to broker a peace between the pair last year but could not prevent Atambayev’s arrest.

Clashes through the night

The two parties that swept Sunday’s poll are supportive of the current president and hostile towards his predecessor.

But both were viewed by rival parties of coordinating a massive vote-buying campaign.

Monday’s clashes began after an initially peaceful rally held by losing parties spun out of control.

Police tried to disperse protesters when they first attempted to force their way to the main government building, known as the White House, on Monday evening. 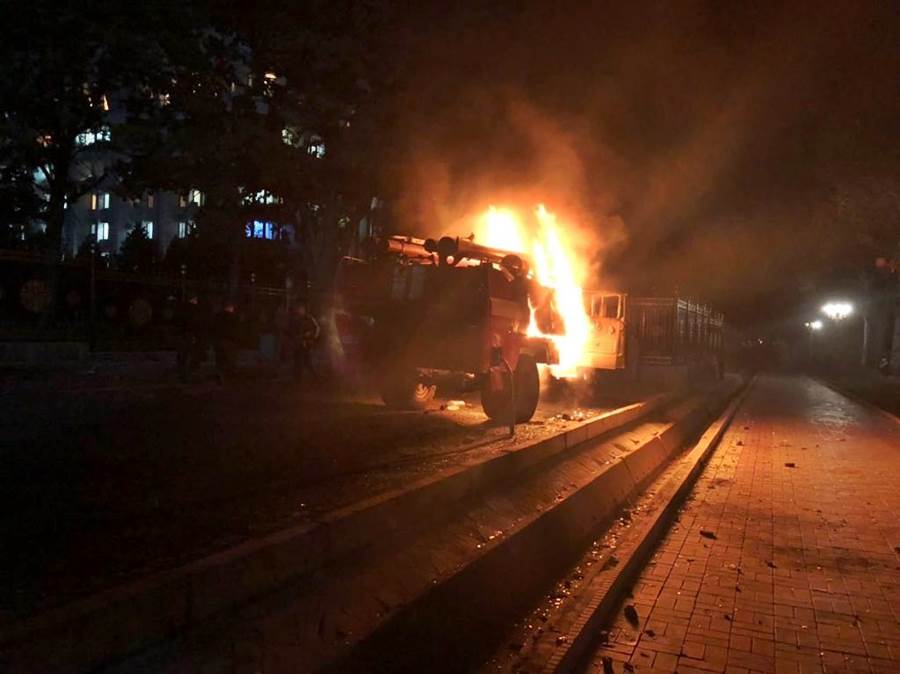 At one point a Radio Free Europe live feed showed police throwing stun grenades as they struggled to push back protesters, who appeared to have set several bins on fire in one particularly fierce exchange.

Health authorities said at least 120 people were being treated for injuries, but there were no reports of deaths by late Monday.

Opposition supporters had called for a re-run of Sunday’s election after an international monitoring mission organised by the Organisation for Security and Cooperation in Europe called “credible allegations” of vote-buying. 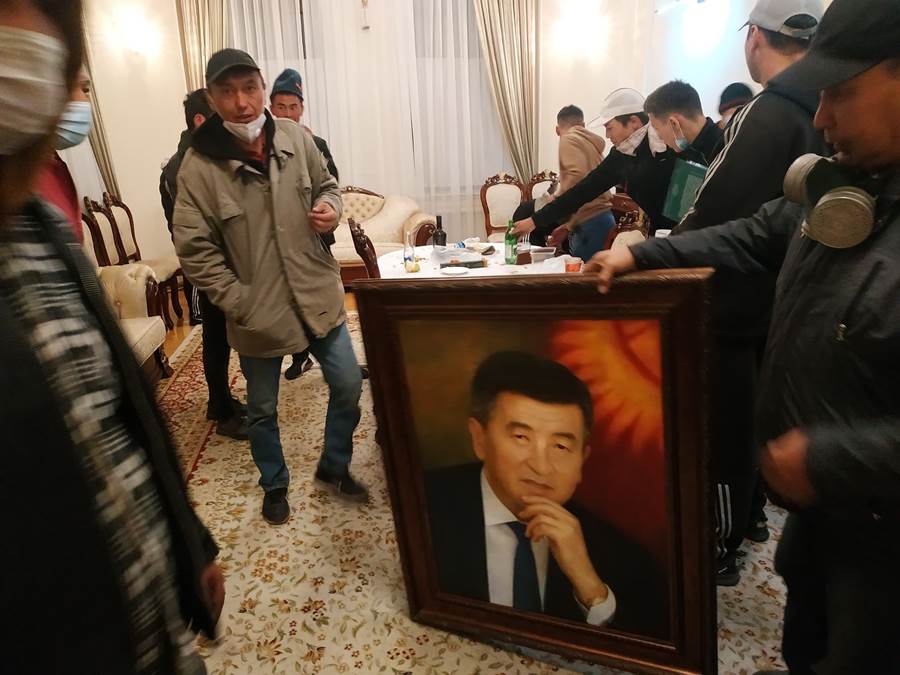 The preliminary count showed two pro-presidency parties, Birimdik and Mekenim Kyrgyzstan, who both favour deeper integration with Moscow, together taking around half of the vote.

Birimdik, which includes the president’s younger brother Asylbek Jeenbekov, said it was open to a re-run of the vote on Monday, but by that time police were already struggling to bring protesters under control.

Opposition parties earlier distanced themselves from the first attempt to storm the government complex.

Ata-Meken member Elvira Surabaldiyeva told AFP news agency her party had no role in the incident, which she blamed on “provocateurs”.

But she added that her party would “stand with the people to the end”. 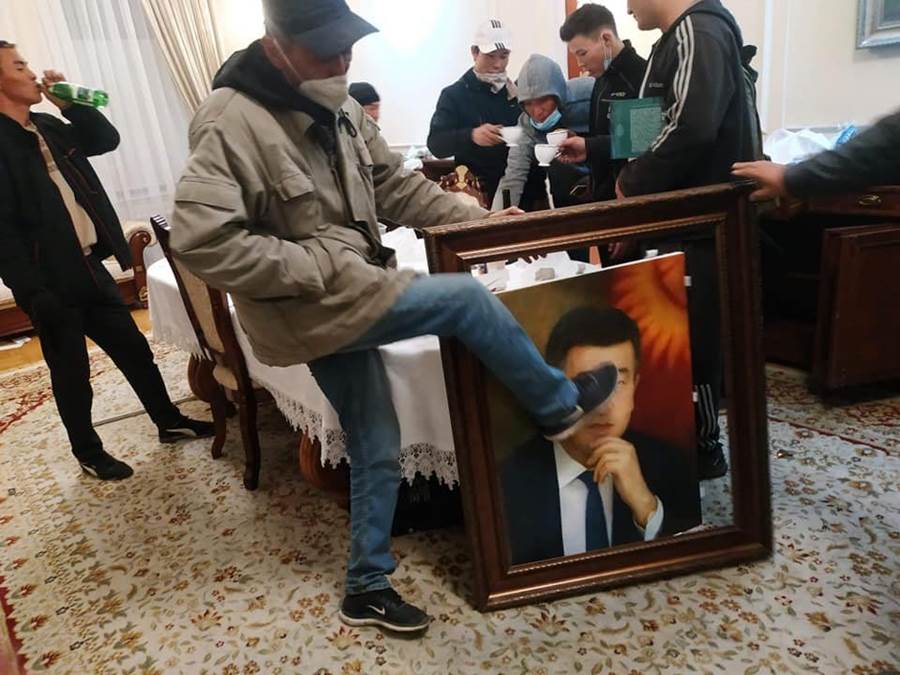 Mobile phone and mobile internet connections were poor or non-existent as the night unfolded.

Eyewitnesses told AFP that shop owners in the vicinity of the protest had begun removing goods from their stores in anticipation of possible looting.

Looting was a feature in two popular uprisings that overthrew authoritarian presidents in 2005 and 2010, but the former Soviet country has enjoyed relative stability for the last decade.

Dissatisfaction with corruption and the domination of politics by powerful clans has increased with the economic challenges of the coronavirus fallout.

Thousands had gathered in central Bishkek for Monday’s protest to denounce the results of the latest vote. 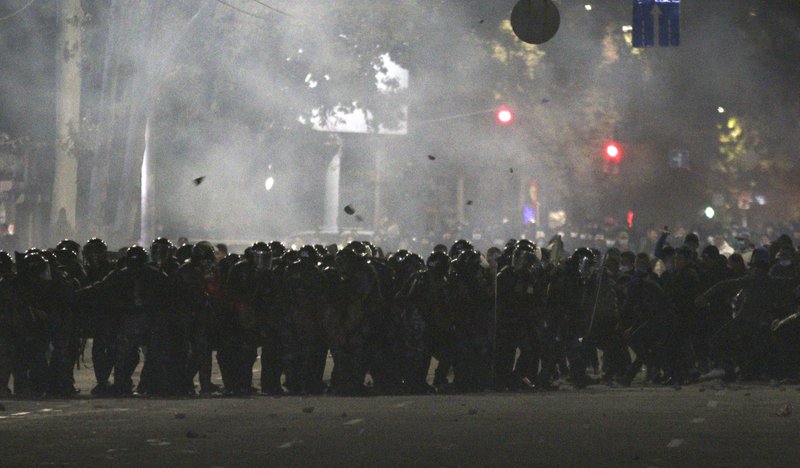 Popular singers joined politicians in addressing the crowd, who responded with chants of “Jeenbekov out”.

“The president promised to oversee honest elections. He didn’t keep his word,” one opposition candidate, Ryskeldi Mombekov, told the protesters.

According to the preliminary results, voter turnout was around 55% and four political parties out of 16 passed the 7% threshold to enter parliament: the Birimdik (Unity) party, Mekenim Kyrgyzstan (Homeland Kyrgyzstan) party, Kyrgyzstan Party and Butun (All) Kyrgyzstan party. Putin’s UAE visit: Deals worth billions to be signed in energy, nuclear power and environment sectors 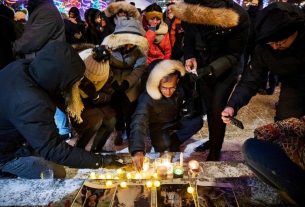 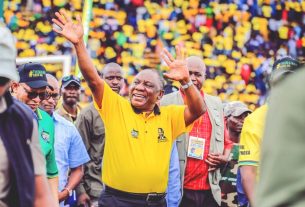