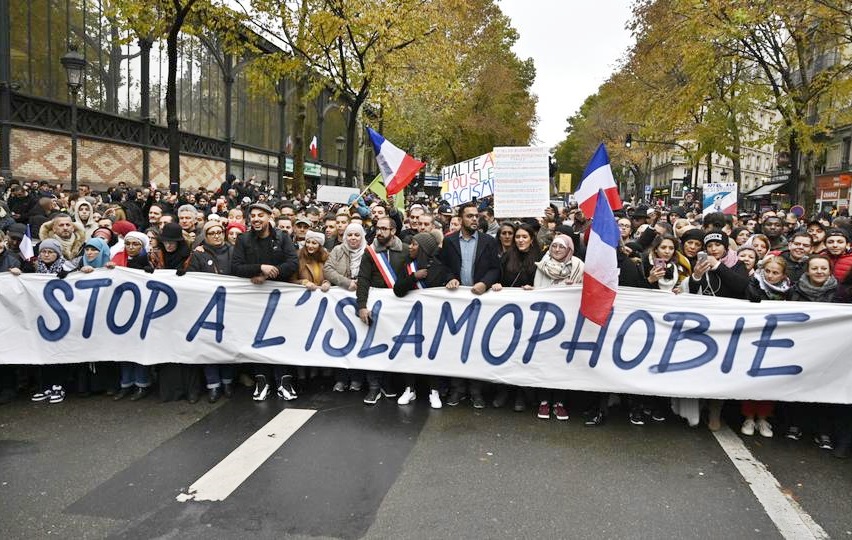 Amnesty International has said that the French government is not the champion of free speech that it likes to think it is.

“French government’s rhetoric on free speech is not enough to conceal its own shameless hypocrisy,” the UK-based organisation said in its report published on Thursday.

“Freedom of expression means nothing unless it applies to everyone. The government’s free speech campaign should not be used for covering up the measures that put people at risk of human rights abuses including torture.”

The report said the way President Emmanuel Macron and his government responded to the killing of Samuel Paty, a French teacher who showed cartoons of the Prophet Muhammad in a class, negates their claims of being supporters of free speech.

n response to the horrific incident, “the French government doubled down on their perpetual smear campaign against French Muslims, and launched their own attack on freedom of expression”.

The report cited the example of French police interviewing four 10-year-old children for hours on suspicion of “apology of terrorism” as they had apparently questioned Paty’s choice to show the cartoons, the report said.

It argues that those who do not agree with publishing the cartoons also have the right to voice their concerns.

The right to freedom of expression also protects the ability to criticise the choice to depict religions in ways that may be perceived as stereotypical or offensive.

Being opposed to the cartoons does not make one a “separatist”, a bigot or an “Islamist”.

Suppression of Muslim freedom of expression

The Amnesty report pointed out that while the right to express opinion or views, that may be perceived as offending religious beliefs, is strenuously defended in France, Muslims’ freedoms of expression and religion usually receive scant attention in the European nation under the disguise of Republican universalism.

In the name of secularism, Muslims in France cannot wear religious symbols or dress in schools or in public sector jobs, the report highlighted.

No difference between ‘radical’ and ‘devout’ Muslims

The murder of Samuel Paty has also prompted actions by the French authorities which recall the state of emergency that followed the 2015 Paris attacks.

Beginning in 2015, parliament-approved exceptional measures under the state of emergency led to thousands of abusive and discriminatory raids and house arrest targeting Muslims.

In a disturbing sign of history repeating itself, the French government is now in the process of dissolving organisations and closing mosques, on the basis of the ambiguous concept of “radicalisation”.

Throughout the state of emergency, “radicalisation” was often used as a euphemism for “devout Muslim”.

The report also mentioned announcement by Gerald Darmanin, the Minister of Interior, about his intention to dissolve the Collective Against Islamophobia in France (CCIF), an organisation that combats discrimination against Muslims.

He has described the CCIF as “an enemy of the Republic” and a “back room of terrorism”.

The Minister has not produced any evidence that could substantiate his claims.

He also expressed his intention to expel 231 foreigners who were suspected of “radicalisation” and threatening national security.

The authorities then proceeded to carry out 16 expulsions to countries such as Algeria, Morocco, Russia and Tunisia where Amnesty International has documented the use of torture, particularly for persons labelled as threats to national security.

The French Ministry of Education has also engaged in a cultural war against multiculturalism and critical race approaches, according to the report.

The ministry has argued that attempts to tackle entrenched racism are based on ideas “imported from the US” and that they are a fertile ground for “separatism and extremism”.

The report pointed out that “it is not extremist to note that Muslims and other minorities are victims of racism in France. It is factual, and to say so is a right protected by freedom of expression”.

Limits to freedom in France

Amnesty International also cited several incidents in France that run contradictory to its claims of being a champion of free speech.

It gave the example of the 2019 court conviction of two men for “contempt” after they burnt an effigy depicting President Macron during a peaceful protest.

It also mentioned a new law currently under discussion at the French parliament that criminalises the use of images of law enforcement officials on social media.

In June this year, the European Court of Human Rights found that the convictions of 11 activists in France for campaigning for a boycott of Israeli products violated their free speech.

In light of the above example the report said it “is hard to square this with the French authorities’ vigorous defence of the right to depict the Prophet Muhammad in cartoons”.