In a segment broadcast on Tunisian TV Channel Elhiwar Ettounsi Monday, Msilini said a ship heading to the country with the precious cargo “was stolen.”

The shipment contained an alcohol-based ingredient used to manufacture sanitisers, but it never made it to Tunisia, according to the minister.

His comments came in response to a series of questions on initiatives aimed at alleviating the country’s shortage of sanitising products during the current coronavirus outbreak.

Msilini did not give further details on the alleged theft, but drew similarities to an incident that occurred in the Czech Republic Sunday, where a shipment of over 100,000 face masks donated by China intended for Italy was impounded by Czech authorities.

Msilini weighed in on the situation, calling it a case of “hysteria” and said countries were stealing from one another. “The European Union is no longer a European union,” he stated.

The Czech incident was later reported by Reuters to be a “mix-up” by Czech customs. According to the report, the central European republic promised to send a replacement shipment to Italy.

“I did not say that Italy seized the ship [containing] medical alcohol … I said it was redirected and that it’s a cargo ship,” Msilini said, “I have nothing to add.”

Tunisia initially rolled out restrictive measures to curb the spread of the virus on March 13, closing down mosques and imposing curfews on businesses. On March 18, a stricter course of action followed, including the suspension of flights to all countries.

Despite efforts to slow down the spread, Tunisia’s total confirmed cases now stand at 75, with three reported deaths from the virus, according to the latest data available by the World Health Organization, updated Monday. 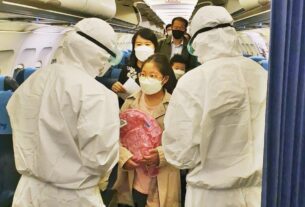