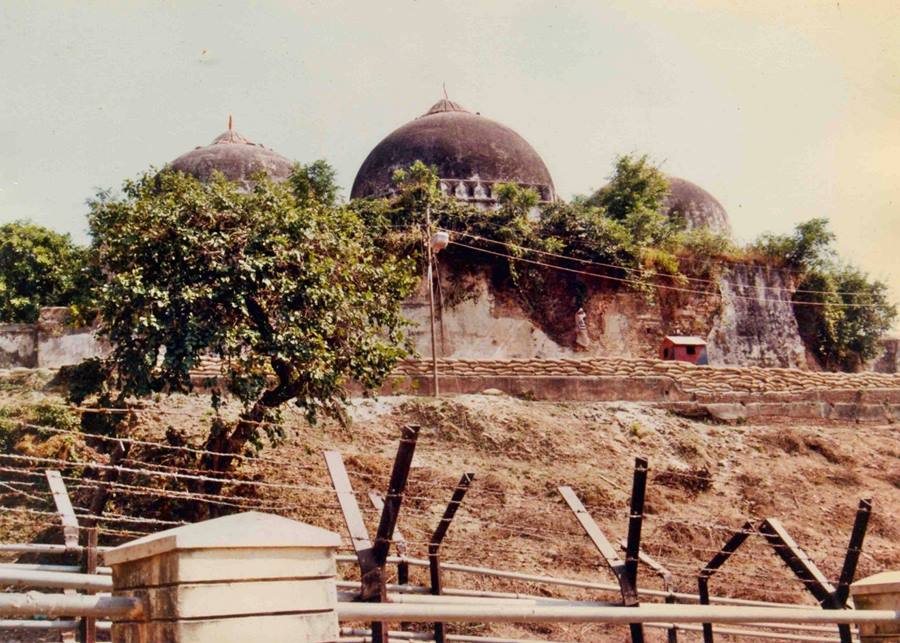 As the countdown begins for the verdict on the Ayodhya dispute, with bated breath of people across the globe, it is time to remember the forgotten characters of the incident that changed India’s history forever. It is just ironical that their names did not figure prominently in the heated arguments placed before the apex court by the lawyers of the parties concerned.

On the midnight of 22 and 23 December in 1949, some idols were placed in Babri Mosque to facilitate the Hindutava forces to occupy power.

Abhiram Das (born as Abhinandan Mishra) should have been a household name, but nobody knows that it was his ‘daredevil’ entry into the Babri Mosque with an idol of Lord Rama, which converted the mosque into a temple and also paved the way for litigation that has been posing a threat to India’s secular fabric for the past seven decades. It is further tragic that the verdict on the issue is likely to be pronounced on the 150th year birth centenary celebrations of Mahatma Gandhi in whose murder, some of the Hindutava forces, having direct links with Abhiram are believed to have been involved. 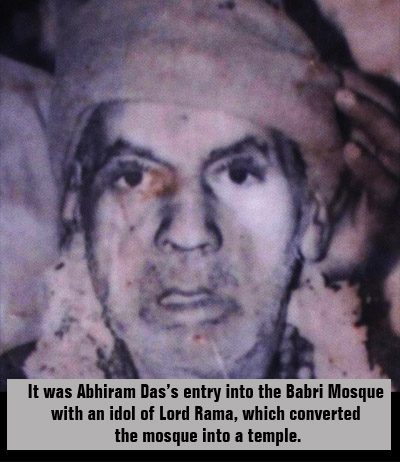 It can be assumed that Abhiram’s soul must be watching the developments with astonishment as to how his forged entry into the mosque has been exploited politically to occupy the highest level of offices despite having no role in the conversion of the 16th-century mosque into a temple.

People are aware of only Ramchandra Das Paramhans and Hashim Ansari, or for that matter Justice Devinandan Agarwal as the initiators of the long-drawn legal battle, but they don’t know about Abhiram and his two cousins who placed the idols at the behest of Parmahans.

Abhiram was born in Rarhi village in Darbhanga district of Bihar and was illiterate. He left home when his father married his little sister to an older man. In his opinion, it was like ‘selling’ his sister to a 40-year-old man. With no one to support him, he happened to reach Ayodhya where he found shelter in Hanuman Garhi. He became a disciple of Mahant Saryu Das and succeeded in occupying the seat of his guru after his death. He was fond of wrestling. He could grapple with several persons simultaneously—a qualification that made him famous in Ayodhya and can be described as a reason for his selection for the incident that posed much heartburn to secular India recovering from Hindu-Muslim divide after partition.

The timing of placing the idols was perfect, India was about to adopt its constitution a month later, and Mahatma had been slain by those who perceived him as pro-Muslim. These forces always wanted India to be declared a Hindu Rashtra, and they were desperate to make their presence felt after maintaining a low-profile following the assassination of the father of the nation, in which the popular faces of Hindutava agenda were accused.

Abhiram had no knowledge about what he was going to do; he only knew one thing: as a devout Hindu, he should liberate the birthplace of Lord Rama. He wasn’t aware he was being used as a pawn in the larger game of politics aimed at ruling India, under the garb of ‘democracy’. He faced arrest, got himself bailed out and then went into seclusion. Abhiram died unheard and immersed in the water of Saryu, according to the age-old customs. 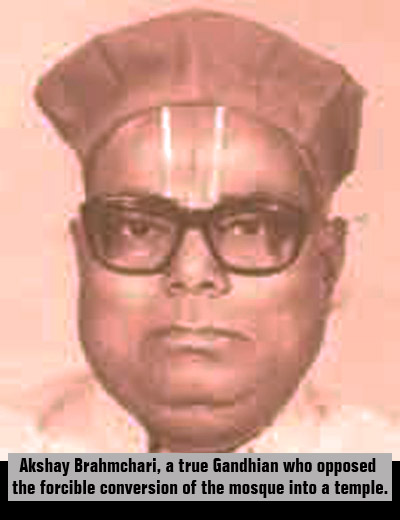 Another forgotten character is Akshay Brahmchari: a true Gandhian who opposed the forcible conversion of the mosque into a temple. He went to fast unto death both in Ayodhya and Lucknow but failed to evoke the desired response of the then Chief Minister Govind Vallabh Pant, Home Minister Lal Bahadur Shastri, and District Magistrate K.K. Nair.

Brahmchari’s efforts could get the disputed site attached by the district administration under the Section 145 of CrPC and handing over its custody to the then municipality chairman Priya Dattaram. He also had the DM removed from elite service, but he always regretted that he could not ensure justice to Muslims. He also suffered at the hands of fanatics who thrashed and forced him to leave Ayodhya and died silently in 2010 in his ashram near Chinhat on Lucknow-Ayodhya road.

The third and final character is Mohammad Ismail. He was the last muazzin (person who gives azaan) of Babri Mosque. The apex court was never told about him by lawyers in reply to the claim that prayers were not being offered in the mosque except for Fridays. It was Ismail who spotted Abhiram chanting ‘Jai Siya Ram, Jai Siya Ram’ and holding idols of Lord Rama under the centre dome of Babri Mosque.

He immediately raised alarm and tried to overpower Abhiram; however, the Mahant’s accomplices pounced upon him and thrashed him mercilessly. They carried him outside the structure and dumped him profusely bleeding. After the incident, Ismail was forced to leave Faizabad, and he went on to offer his services in Paharganj Ghosiyana, an area on the outskirts of Faizabad. Nobody knows when he died and why his name did not figure in the list of witnesses in the charge sheet filed on the basis of FIR lodged by Ramdev Dubey.

It is worth mentioning here that the first civil suit was filed in 1885 in Faizabad. Nirmohi Akhada asked for the maintenance of the site in 1959, and Sunni Waqf board joined the battle in 1961. In 1986, the district judge KM Pandey ordered the opening of the locks at the disputed site. The issue was transferred to Allahabad High Court, which in its judgment gave one-third (each) of 2.77 acres of land acquired by Narsimha Rao government to the three contestants in September 2010. All appealed against the judgment, and now the apex court has reserved its verdict with all eyes fixed what will be the conclusion of India’s ‘biggest dispute’. 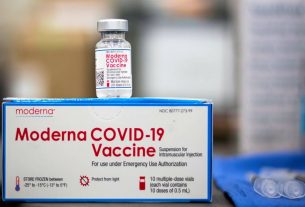 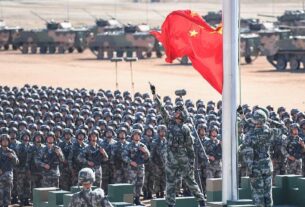 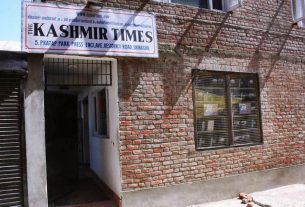