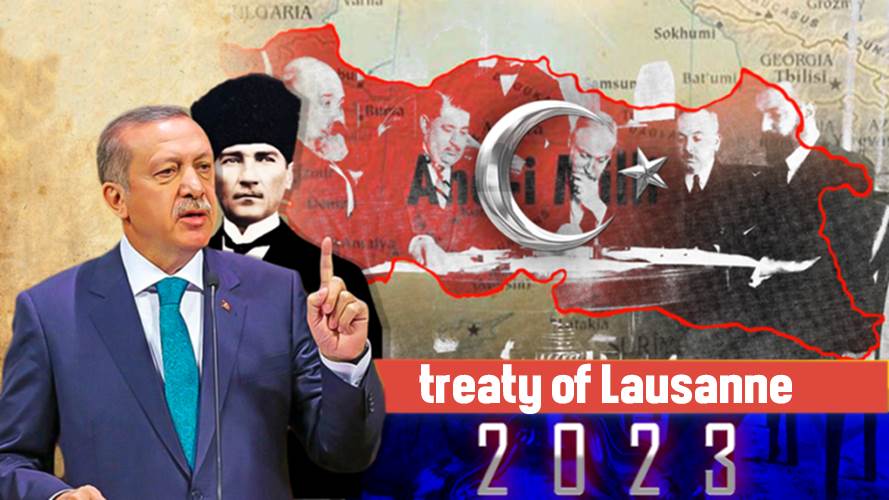 The expiration of the treaty of Lausanne by 2023 has triggered a new debate among the global geo-political and geo-strategic thinkers about how Turkey would respond to this tectonic development. Will Turkey resurrect the Ottoman Empire? Will the geopolitical and geo-economic map of the region change? Will Turkey re-assert herself by using its hard power and thereby creating regional dominance? Queries consonant to these and several others, nowadays, are part and parcel of every transnational discourse.

Recep Tayyib Erdogan‘s statement on the eve of the centennial anniversary of the Turkish republic is conspicuous indicative of the fact that something revolutionary is about to happen after 2023. He declared that Turkey will shape the future of the entire region when it reaches its goals for 2023. Turkey is on the threshold of new victories and successes, he added.

Moreover, Erdogan is also of the opinion that “opponents of Turkey” forced it to sign the “Treaty of Sevres” in 1920, and that of the “Treaty of Lausanne” in 1923, forcing the country to abandon the islands in the Aegean Sea to Greece. Erdogan dubs the Treaty of Sevres, as the first knife in the back of the Ottoman Empire for it forced Turkey to concede vast tracts of land under its domain. Turkey had to renounce sovereignty over Cyprus, Libya, Egypt, Sudan, Iraq and the Levant, except cities which were located in Syria, such as Urfa, Adana and Gaziantep and Kells and Marsh.

Ottoman Empire also had to relinquish its political and financial rights, in November 1914, over Egypt and Sudan. Additionally in a commemoration ceremony held in 2016, Erdogan stated that he rejects any understanding of history that takes 1919 as the start of the 1,000-year history of his nation and civilization” Whoever leaves out our last 200 years, even 600 years together with its victories and defeats, and jumps directly from old Turkish history to the Republic, is an enemy of our nation and state., he stated.

Turks have never forgotten the Treaty of Lausanne, as it caused the reduction of the geography of the modern Turkish state, and forced it to give up large territories that belonged to it. Prior to the treaty of Lausanne, “Treaty of Sevres” was concluded in 1920 that gave independence to most of the non-Turkish nationalities in the Ottoman Empire. However, the Turks rejected this treaty and fought a fierce war against allies until they achieved a great victory over them, especially on Greece during the 1922-1923 war.

Subsequently, the strategizing of “Lausanne II Conference” resulted in the signing of the “Treaty of Lausanne” an international peace agreement signed on July 24 in 1923 in the “Beau Rivage Plus” hotel,  Lausanne. Amongst the signatories of the Treaty are the victorious powers of the First World War (especially Britain, France and Italy), and the Ottoman Empire.  Formally on basis of this treaty, the Ottoman Empire was divided, and the Turkish Republic was founded under the presidency of Mustafa Kamal Ataturk.

The prominent clauses of the treaty of Lausanne included the following:

The international community has started to pay more attention to Turkey’s efforts, notably with regard to the expiry of the Treaty of Lausanne. In accordance with international law, any treaty expires after 100 years, and Erdogan is aiming to link the expiration of this treaty in 2023 to the present situation in Mosul in northern Iraq as well as to Raqqa and Afrin in Syria.

With the expiration of the 100-year-old treaty in 2023, Turkey itself will enter a new era by drilling for oil and digging a new channel connecting the Black Sea and the Sea of Marmara as a prelude to collect the fee from passing ships. This seismic development coupled with Turkey’s recent military adventurism suggests that the geographic contours of the region are for sure, likely to witness a gargantuan metamorphosis after the demise of the treaty of Lausanne.

Over the past century, particularly within the last decade, Turkey has risen to become a somewhat hegemonic power within the region, with Iran being its only rival in influence and Israel being its only rival in military might. Its proactive stance in the Syrian conflict – through its quite famed “Operation Euphrates Shield” and its current “Operation Olive Branch” – has enabled the country to become a regional power again as to be reckoned as military, economic and diplomatic leader.

According to Mohamed Abdel-Kader Khalil, an Egyptian expert on Turkish affairs, “Turkish foreign policy in the Middle East is linked to the use of Turkish military capabilities in the region. This has been reflected in Turkish military concentrations on the borders with Iraq and Syria and in its involvement in the Red Sea through an agreement on the Sudanese island of Sawken as well as the Turkish military intervention in the northern Syrian city of Afrin.”

“These military interventions have come against the backdrop of a previous Turkish intervention in northern Iraq, with the intention of employing combat exercises in several regional countries and signing military agreements with Arab and African countries. The idea is to expand Turkish relations abroad to promote military exports, maximize economic returns and increase regional influence based on hard power,” He further said: “Erdogan’s aggressive nationalism is now spilling over Turkey’s borders and is aiming at grabbing land in Greece and Iraq.”

“At first glance, the maps of Turkey now appearing on Turkish TV resemble similar irredentist maps put out by proponents of a greater Greece, a greater Macedonia, a greater Bulgaria, a greater Armenia, a greater Azerbaijan, and a greater Syria. That is to say, they aren’t maps of the old Ottoman Empire, which was substantially larger, or the entire Muslim or Turkic world. They are maps of Turkey, just bigger,” he added.

“Turkey’s hard power has been emphasized in its foreign policy in the context of regional operations and linked to Turkish official statements in 2017. There is a desire to regain control of areas that were once part of the former Ottoman Empire.” Khalil added  “Turkey has long been associated with the idea that many areas in the Middle East or Central Asia suffer from conflicts because of their isolation from the Turkish state. The latter has reserved the right to intervene in the region not out of strategic interests alone, but also based on historical considerations.”

To add, the evolving situation in the wake of the expiry of the Lausanne treaty would also result in the emergence of a new wave of re-alignments. Erdogan’s ambitions to increase Turkey’s influence in the region and to lead the Muslim world would upset the apple cart of the west and its allies in the region. Until recently, the US and its regional allies—Israel, the majority of the Arab Gulf states, and Turkey –were aligned against Iran. This alignment may no longer sustain itself during the forthcoming developments.

Relations between Saudi Arabia and Turkey have soured over the issue of the ouster of Egyptian President Mohammad Morsi which was orchestrated by Saudi Arabia and the United States. Furthermore, Turkey’s and Saudi Arabia’s perspectives and interests regarding the Syrian Civil war have diverged. The complexities of the conflict have drewn Turkey closer to Russia and its allies China and Iran. The United States, Israel and Saudi Arabia, however, remain united on the opposite side. Russia, China, Iran nexus seems to be a better fit for Turkey than  NATO.

To encapsulate, given the emerging geopolitical realities, Pakistan should also formulate a strategy to grab the opportunities which Turkey is going to offer in the days to come. It should devise a holistic plan comprising of two phases pre-2023 era and post 2023 era. In addition, it should study the Turkish market deeply and export the goods tailored to the needs of Turkish people. 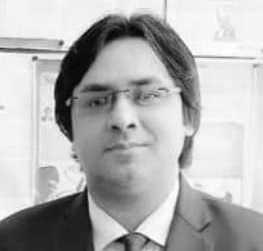 OPINION: Can South Africa follow through on its anti-apartheid solidarity with Palestine? 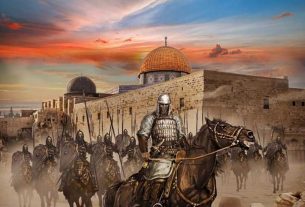 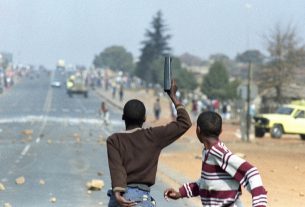