Attackers threw rocks at a mosque in the central German city of Kassel on Sunday while some 50 Qurans – the holy book of Islam – were damaged in another attack on a mosque in northwest Bremen. The Central Mosque in Kassel, which operates under the Turkish-Islamic Union for Religious Affairs (DITIB), was attacked early Sunday by unidentified suspects. Kassel Central Mosque Foundation Chairman Seyfettin Eryörük said that the mosque was targeted with rocks at a time when no one was in the building, adding that the windows were broken in the attack. Turkey’s Consul General in Frankfurt Burak Karartı condemned the attack in a statement he shared on social media, urging security forces to find the perpetrators.

The Kassel Prosecutor’s Office has launched an investigation into the attack. The same mosque was attacked by PKK sympathizers in previous years and the perpetrators of the incident were not apprehended. Meanwhile, 50 Qurans in Rahman Mosque in Germany’s Bremen were damaged by attackers who threw some of the holy books into the toilet, reports said. Muslims living in the city expressed their sorrow over the anti-Muslim attack on social media, urging authorities forces to take action. The attack came less than two weeks after a man shouting anti-Muslim slurs on a Bremen tram stabbed a 16-year-old teen in the neck with a knife.[G1]

Bremen State Deputy of the Christian Democratic Union Party (CDU) Oğuzhan Yazıcı told Anadolu Agency that he strongly condemns the ugly attack targeting Rahman Mosque, which operates under the Bremen Islamic Council. “After the news of the stabbing of a Muslim teenager last week, we now receive news that the Holy Quran has been destroyed. Muslims from Bremen is very nervous and anxious. Like synagogues, mosques should be well protected by the state,” Yazıcı said, adding that the government should take these events more seriously and develop persistent measures against hostility toward Muslims. German police said Wednesday that the attacker who stabbed the Muslim teenager in Brenan on June 31 had been arrested. The teen suffered non-life-threatening injuries to his neck and is receiving treatment at a hospital.

Anti-Muslim attacks have been on the rise in Germany in recent years, fueled by propaganda from far-right parties, which have exploited fears over the refugee crisis and terrorism.

Police recorded 813 hate crimes against Muslims last year. At least 54 Muslims were injured in the attacks, which were carried out mostly by far-right extremists. Along with attacks based on far-right motives, mosques have been frequently hit by supporters of the PKK terrorist organization in recent years. Last week, threatening letters including Nazi and nuclear weapons symbols were left in mailboxes of Turkish citizens in Cologne. Written in the letters, which were found in some citizens’ mailboxes located in the city’s Keup Street, were hate messages, including, “You are just like Jews. Soon, attacks will start to target you.”

Germany, a country of over 81 million people, has the second-largest Muslim population in Western Europe after France. Among the country’s nearly 4.7 million Muslims, 3 million are of Turkish origin. Many Turkish origin Germans are second- and third-generation German-born citizens of Turkish descent whose grandparents moved to the country during the 1960s. Ankara has been calling on Western governments to embrace a stronger stance against rising anti-Islam attacks worldwide. “It is obvious that these attacks will increase as long as Western politicians and media do not have strong reactions,” Justice Minister Abdulhamit Gül said Sunday during his visit to New Haven Diyanet Mosque in Connecticut, which was attacked on May 12, the seventh day of Ramadan, the Islamic holy month during which Muslims fast and pray. GOLDMAN SACHS TO PAY US$3.9B IN 1MDB SETTLEMENT TO MALAYSIA 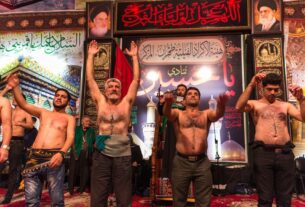