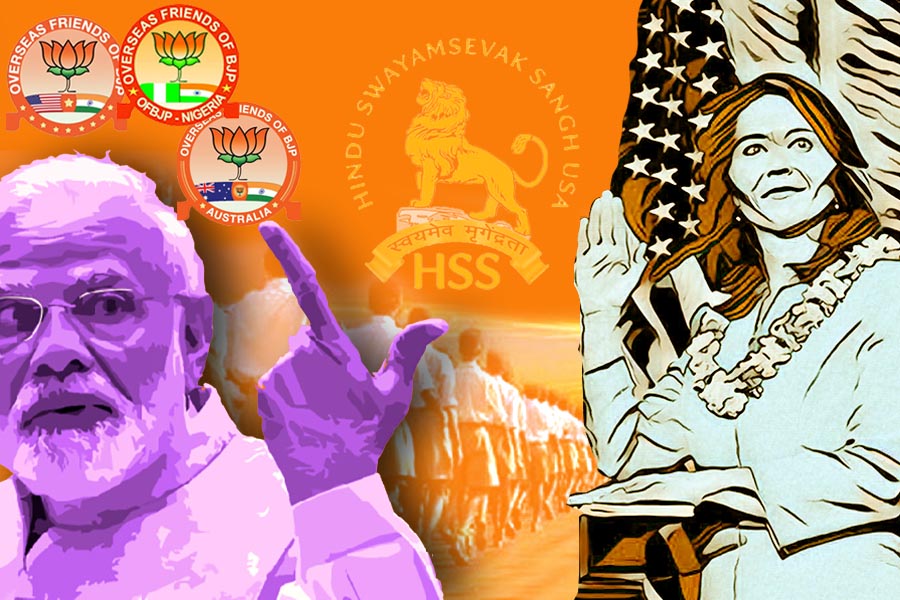 In November 2011, the Overseas Friends of the BJP (OFBJP) — the international wing of India’s ruling Hindu nationalist Bharatiya Janata Party — organized training camps in the US to teach its American supporters how to campaign for the party’s election in India.

Conducted by the political advisor to the man who was then president of the BJP and hosted in one case by Ramesh Bhutada, the Vice-President of HSS-USA — the American wing of India’s fascist RSS paramilitary — the camps were a prelude to a systematic, years-long campaign in America by RSS-BJP activists to get Narendra Modi elected as Prime Minister of India.

In the 1990s, long before he was elected, when Modi was a simple RSS member assigned to work within the BJP, he traveled to the US. While touring America, he stayed with people like Ramesh Shah (a former president of OFBJP) and Bharat Barai (a former governing councillor of the Vishwa Hindu Parishad of America, the US wing of India’s VHP, which is labeled by the CIA as a “religious militant organization”).

Fast-forward to the 2000s and Modi, after being accused of allowing — or even orchestrating — an anti-Muslim pogrom in Gujarat, was banned from entering the US. Nevertheless, in ensuing years, the OFBJP’s Ramesh Shah traveled to Gujarat to campaign for the BJP’s election while the VHP-America’s Bharat Barai began hosting routine video-conferences with Modi to popularize him among the Indian-American diaspora.

In 2013, leading up to India’s general elections, the OFBJP’s annual convention featured the BJP vice-president — who appeared in person — as well as a video-conference with Modi, who, in addressing his audience of Indian-Americans, urged them to “play a meaningful role” in helping to get him elected. That they did. While the OFBJP, reported one newspaper, worked to “fight the negative impressions about Modi that will be created by his opponents who will lobby US lawmakers,” they mobilized a massive campaign team to ensure his election. While thousands remained in the US to staff phone-banks to call Indians and urge them to back the BJP, up to 5,000 — some of whom have been described as “hired volunteers” — flew to India to serve as boots on the ground for Modi’s campaign. 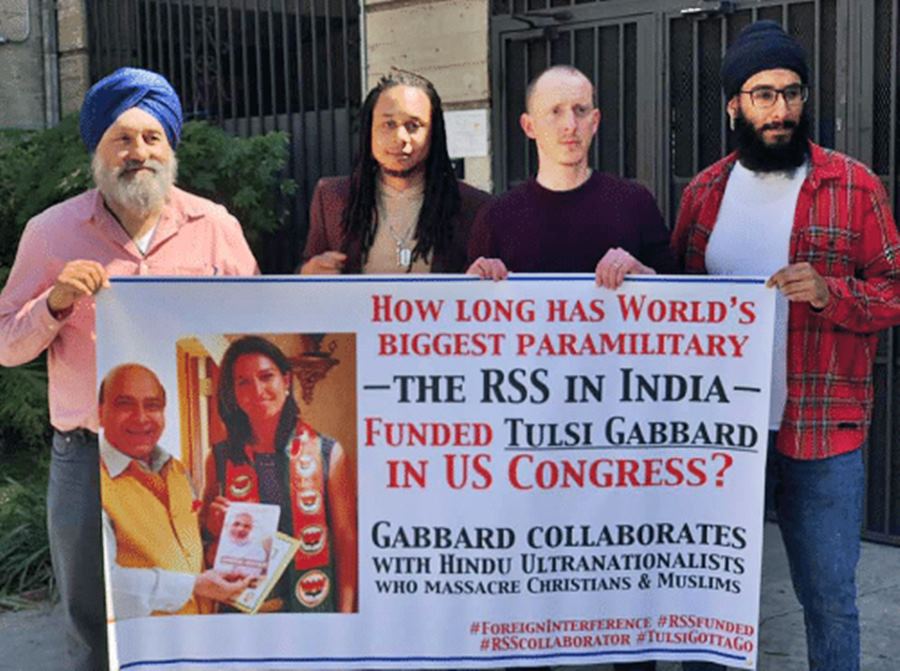 Meanwhile, the US Congress was considering a bipartisan resolution which warned that “strands of the Hindu nationalist movement have advanced a divisive and violent agenda that has harmed the social fabric of India” and praised the US government for denying Modi a visa. As it gained traction, Congresswoman Tulsi Gabbard stepped forward to derail it, claiming that criticism of Hindu nationalism — a term she later defined as “pride in one’s religion” — prevented “strengthening the ties” between the US and India. What Gabbard neglected to mention as she opposed the resolution was that nearly 21 percent of her congressional campaign donations that year came from RSS-BJP and pro-Modi activists, including people like OFBJP’s Ramesh Shah, VHP-America’s Bharat Barai, and HSS’s Ramesh Bhutada.

My 18,000 word profile of #TulsiGabbard is now outside paywall & free to read. It offers a bio sketch of her, w/focus on her early years in Congress to trace her financial & other support from US affiliates of the RSS, a history of RSS in USA, & more.https://t.co/Co6nzAd7oa

In 2014, leading up to Modi’s election, Bhutada organized phone-banks and sent off an OFBJP team to India, which included Ramesh Shah, while Barai personally led a team of 650 who traveled to Gujarat to campaign for the BJP.

Gabbard’s role did not go unrewarded. After Modi was elected, she was invited to keynote an OFBJP banquet celebrating his victory. As she herself faced re-election to a second term, the OFBJP’s chief told her, “your victory later this year is a foregone conclusion,” while the event’s emcee urged the audience to donate to her campaign — something he had also done at another OFBJP victory banquet where he applauded her for opposing the resolution criticizing Modi. 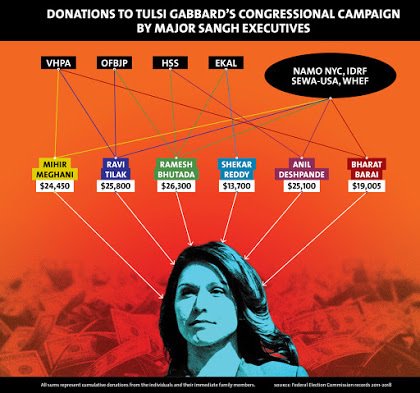 Since Modi’s election, the OFBJP and the HSS have continued to promote and assist in the whitewashing of the pogrom-tainted Modi. HSS and OFBJP officials — including people like Ramesh Shah and Ramesh Bhutada — led the way in organizing mega-receptions in the US for Modi where he was greeted like a rockstar. Meanwhile, seeking to influence US policy towards the Modi regime and persuade America to turn a blind eye to any allegations of human rights violations, they continued backing congressional representatives like Gabbard as well as others like Raja Krishnamoorthi of Illinois and aspiring (but ultimately failing) Sri Preston Kulkarni of Texas.

No doubt to take advantage of the passion and particularly the wealth of pro-BJP diaspora members, Modi’s regime changed Indian law in 2018 to allow political parties to receive foreign funding.

In August 2020 — 29 years after it was established in 1991 — the OFBJP-USA was finally forced to register as a “foreign agent” and admit that it often “acts under the direction or at the request of BJP officials.” Nevertheless, the group remains active in approximately 40 countries around the globe, including Canada, the UK, and Australia. These groups, whose membership is usually interlaced with that of the HSS, continue to work to support election of the BJP from abroad as well as to support election of BJP sympathizing politicians in their home countries. It is what one might term a form of dual foreign interference. While BJP sympathizers who are no longer Indian citizens interfere in India’s sovereign elections to support the BJP, the same sympathizers — often with backing by BJP officials from India — interfere in elections in other countries to install pro-BJP politicians.

“The traditional muscle power of the BJP has always been the RSS,” a former US ambassador to India once said.

While the RSS may be the BJP’s muscle power, its international wing — the HSS — along with the OFBJP may very well be its backbone. Modi’s spectacular and catastrophic rise to power can be credited, to a large extent, to the tireless efforts of his hordes of international supporters, none of whom have to endure life under his regime, but all of whom are eager to enable the rise of fascism in the India they themselves have left behind. 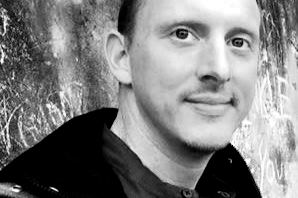 Pieter specializes in analysis of historical and current affairs in South Asia. He engages with issues such as human rights, supremacist political ideologies, ethnonationalism, politicization of religion, authoritarian government structures and policies, state-sponsored atrocities, and the need to unify around doctrines of liberty. | http://www.pieterfriedrich.net 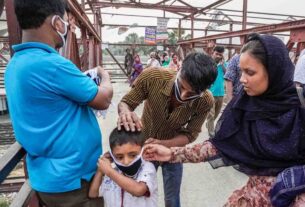