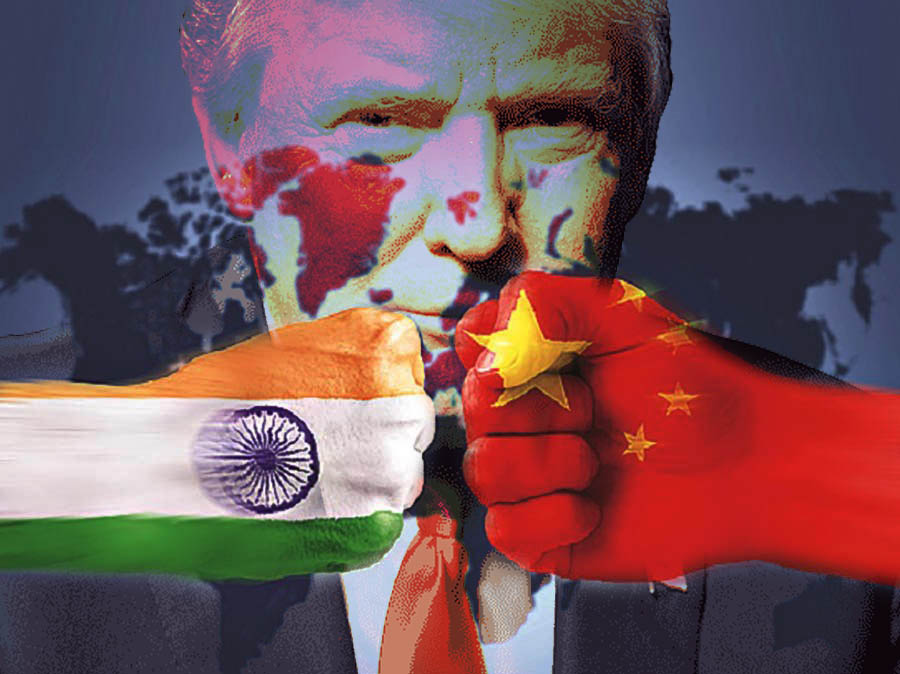 ISTANBUL (AA) – India, perceived as a pivot to the US policy of containing China, appears to be on the horns of strategic dilemma both regionally and globally. While it is weighing the costs of conflict to its economy as its army is engaged in a standoff with China along the borders, the US is supporting its pro-active approach in a strategic context.

There is a long and complex history of border tension between China and India and the problems in the region. These problems, dating back to the war in 1962, have deepened since the Doklam border crisis in 2017. Both countries consider the construction activities on the un-demarcated boundary line as illegal.

The frequent tensions turned into a mortal fight this year. In May, soldiers from both sides were wounded as a result of clashes at the Line of Actual Control (LAC). The incident, which took place on June 15, was a complete disaster. India lost 20 soldiers as a result of face to face fight, where both sides used batons. While China is yet to make an official statement on its losses, the border clashes reported casualties for the first time since 1975.

The Global Times — a daily newspaper under the auspices of the Chinese Communist Party’s People’s Daily newspaper — did not publish a figure of causalities Chinese army suffered, while, explaining the losses.

In contrast, India-based sources reported the losses on the Chinese side and claimed they were far greater than Indian casualties. Reports from the region indicate that both armies are concentrating their troops along the border. Even though both countries are governed by an agreement called Maintenance of Peace and Tranquility Along the Line of Actual Control in the India-China Border Areas, the border dispute flares up frequently from time to time.

One of the reasons that triggered the crisis in the region is interpreted as India’s decision of revoking the provisions of Article 370 of its Constitution last year that granted some degree of autonomy to Jammu Kashmir.

Meanwhile, it is worth noting that the Indian Prime Minister Narendra Modi and Chinese President Xi Jinping, who met in Wuhan in 2018, had declared that they “respect each other’s sensitivities, concerns and wishes” regarding the border dispute. The two countries are known to have been in robust communication through diplomatic and military channels after the June 15 clash.

-Prospect of escalation of tension low

It is necessary to note that soothing messages are coming from China in particular. India, on the other hand, is busy constantly renewing and announcing its instructions to the Indian Army, especially to calm its domestic lobby and reaction to the losses. On the other hand, it is necessary to add that China also organized a large military exercise in which 7,000 soldiers who participated in real projectiles were tested in the mountain’s regions in the east of Tibet.

The prospect of an expansion of the conflicts is low for now. Recent border disputes between the two countries have also spiraled into a crisis. In 2013, the Chinese military had objected to the construction of an Indian observation outpost near the LAC in the Depsang Valley in northern Ladakh. This standoff lasted for 21-day. Again in 2017, the two countries faced a crisis on the Doklam plateau that lasted for 72 days. The crisis had begun after the Indian Army objected to the Chinese construction of a strategic road in the region.

Significantly, China in its statements, while emphasized on the return of calm has laid claim on the Galwan Valley as well. It remains within the borders of China. China claims India has consistently breached its de facto LAC in the Galwan Valley since April, with which it has now built roads, bridges, and facilities.

One of the most important corridors of China’s Belt and Road Initiative runs through the Karakorum, close to the Galwan Valley, where the June 15 clash took place. For this reason, this region means a lot to China and is important. The Galwan Valley is also known as one of the key sites of the war that took place in 1962.

China is trying to demonstrate a strategic commitment to the borderline, waiting for the appropriate time to come. While the influence of China in the region has increased with its global rise, it will be appropriate to say that the international state of affairs requires the continuation of the status quo in the region.

China has a stronger economy than India and is five times the size of India in terms of GDP. Its annual defense spending is three times higher than in New Delhi. At this point, India and China together account for 17.6% of the global economy. Their mutual bilateral trade is at $92 billion. There is also an asymmetric relationship in the bilateral trade against India.

-India’s counter to Chinese proactiveness in the Indian Ocean

After the developments such as China establishing a military base in Djibouti, its proactive approach in the Indian Ocean, improving relations with the neighboring nations, and deepening relations through the generational-path Initiative, it is possible to say that India is evolving a strategy of deterrence.

It is also striving to expand its hegemony in the region and to build legitimacy on the demarcation line. India is building over 60 strategic roads along the LAC, expected to complete in 2022. China is also undertaking similar activities on its side.

Instead of resolving the border dispute, India sees it as more logical to resolve it in a conjuncture when it becomes stronger after a certain period. Even though Modi’s statement that “the only way the 21st century belongs to India is to trust ourselves” stands out as his willingness to maintain a neutral position, deepening relations with the US in the region to show that India will continue to be strategically distant and balanced with China. It is possible to see these border disputes continuing with a certain intensity as part of the deterrence strategy that India is trying to evolve against China in the region.

Meanwhile, after the recent incident, Modi’s announcement that the Chinese had not crossed the border seems to have been met with a domestic reaction. Indian media interpreted this statement as a step back. In this case, the arguments of China about the conflict in question are gaining validity. On the other hand, Modi’s statement also staunchly supports the Chinese argument, which claims the entire Galwan Valley. On the other hand, it undermines the credibility of the Indian government and its military.

Even though India has serious border problems with China, it prefers a balanced approach to the overall strategy. When India’s relations with superpowers Russia and the US are considered, they are positive and at a certain level. But recent developments and the tough policy adopted by the Donald Trump administration towards China is pushing India as a pivot.  It is also making it imperative for India to make a choice. The strategic approach of the US to India is gaining depth.

The Indo-Pacific Strategy report published by the US in 2019 is of great importance in this context. The report described China as the “biggest competitor”.  The change of nomenclature of the Asia-Pacific concept to the Indo-Pacific concept is also remarkable. It is possible to say that the main reason for this is the strategic importance given to India by the US is to balance China in the region.

“Geopolitical rivalry between visions of free and repressive world order is of fundamental concern to US national security,” the report says in one of its most notable statements. Even this statement contains significant data on the ideological origins of the strategic rivalry between the US and China. Therefore, the US expects India to “choose sides.”

-Indo-Pacific region crucial for the US

The report also mentions the Indo-Pacific region as “one of the most critical regions for the future for the US”.  Meanwhile, it is worth noting that 60% of the global maritime trade goes through the region. The US strategy confirms once again that India is a key country in the containment approach towards China. The US has even changed the name of its unit, known as the Pacific Command (USPACOM), to Indo-Pacific Command (USINDOPACOM) in 2018.

Even this move shows the importance the US attaches to the region and its strategy. The report also describes China as a revisionist power, a discourse that should be noted with significance. However, it is also emphasized that one of the most defining elements of the 21st century is the rise of China.

Also, the military relations between the US and India continue to improve. In 2018, both countries signed a Communication Compliance and Security Agreement (COMCASA) to facilitate the exchange of communications and equipment. Further, Trump’s visit to India, followed by a $3 billion arms sale to India, is a move that should be noted with importance.

India will like to see the US on its side, especially in terms of the diplomatic and military support, in its disputes with China. But India is likely to adopt a “risk aversion strategy” rather than staying between the two superpowers as a result of rising tensions in the region. It is worth highlighting Prime Minister Modi’s principle of “strategic autonomy” plays here.

The region is in a tremendous geopolitical mess. The fluid geopolitics in the region appear to determine the relations of all three countries. While China is trying to expand its influence in the region, it does not want to face India in the current situation because of the economic problems forced by the global coronavirus pandemic. India, on the other hand, considers it a pragmatic necessity to be part of the Indo-Pacific strategy of Washington to surround China.

The international system continues to shift towards “a leaderless intermediate period, where the old order dies but no new order is born” (interregnum), which Antonio Gramsci describes in his work Prison Notebooks. This shift also points to the rhetoric of the “multipolar world” launched by China and India, while the US is keeping together and maintaining its hegemony of “historical structures” that are cracking and about to disintegrate.

China and India coming closer in the region coupled with the rapprochement between China and Russia is a strategic nightmare for the US. However, the militarily strong US has economic difficulties to support the countries in the region, it perceives as allies. While China dominates the region with its Belt and Road Initiative, the problems the US has experienced about institutional capacity do not allow it to build a counter-hegemonic zone. When all these variables are evaluated together, it is seen that India is trying to stay out of the rivalry between the US and China and is trying to strike a balance. While the border strife may break this balance, in the long run, India and China’s preferences appear to be to maintain a balanced relationship and a model based on competition.

* The writer is a researcher in the field of US-China relations and China’s Foreign Policy. He also holds a doctorate in international security. 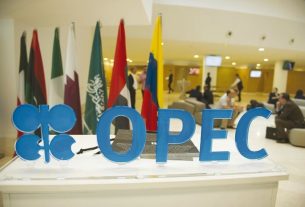 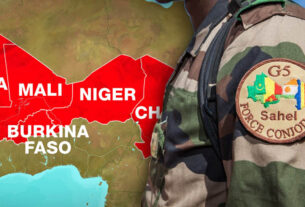 SAHEL COALITION TO AIM FOR LASTING PEACE IN WEST AFRICA 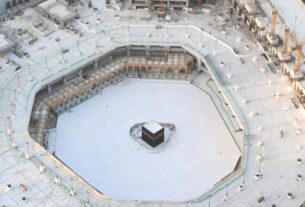