Thousands of Muslims have rallied across the South Asia nations of India, Bangladesh and Pakistan over derogatory remarks on Prophet Muhammad by two officials from India’s ruling party that has triggered a diplomatic backlash against New Delhi.

Protests were reported from various Indian cities, including capital New Delhi, on Friday as Muslims marched after the afternoon congregation prayers, raising slogans against the government and calling for the arrest of the members belonging to Prime Minister Narendra Modi’s Bharatiya Janata Party (BJP).

Anger has been growing in India and Muslim-majority nations across the world since last week, when two BJP officials – spokeswoman Nupur Sharma and Delhi media cell head Naveen Kumar Jindal – made comments seen as insulting Islam’s prophet and his wife Aisha.

The BJP suspended Sharma and expelled Jindal, saying it denounces insults of religious figures. The right-wing party also asked its spokespersons to be “extremely cautious” on religious matters in primetime “debates” on Indian news channels.

Police in New Delhi on Thursday filed cases against the two BJP members and others – including a Muslim parliamentarian and journalist – for “inciting hatred” and other charges.

On Camera, Police lathi-charged the protesters In India’s Ranchi, amid Protests Over #ProphetMuhammad Comments. Protesters are demanding the arrest of suspended BJP spokesperson #NupurSharma #الهند

But India’s Muslims, who are facing a sharp rise in Islamophobia and attacks on them since Modi came to power in 2014, say those actions are not enough.

Several parts of Indian-administered Kashmir, the country’s only Muslim-majority region, on Friday observed a spontaneous shutdown to protest the derogatory remarks by the two BJP officials leaders against Prophet Muhammad.

On Camera, Cops Fire In Air In Ranchi Amid Protests Over #ProphetMuhammad Comments.#الهند

“The issue is outraging for any Muslim in the world. The BJP has been peddling hate against Muslims but they must know that the insult to our prophet will not be tolerated,” Mehraj Ud Din, a shopkeeper in the main city of Srinagar told Al Jazeera.

Protests after the Friday prayers were also reported from several districts in the northern state of Uttar Pradesh, India’s most populous with 204 million residents, more than 19 percent of them Muslims.

In New Delhi, a large number of people gathered outside the Mughal-era Jama Masjid in the old quarters of the capital, and raised slogans against the BJP-led government. Similar protests were reported from other Indian states, including West Bengal and Telangana.

Reporting from New Delhi, Al Jazeera’s Pavni Mittal said there is “immense anger on the streets of India” over the comments made by the BJP officials against the Prophet Muhammad.

#Watch: People stage a protest at #Kolkata’s Park Circus area after Friday prayers against the remarks made by suspended #BJP leaders against #ProphetMuhammad.#India #NupurSharma #الهند

She said the protests turned violent in some places, with police baton-charging the demonstrators and firing tear gas.

“Protesters are demanding that former spokeswoman of the BJP Nupur Sharma be arrested for making blasphemous comments,” she said.

Mittal said the BJP acting against Sharma and Jindal, according to critics, was “a response too little too late”. “They (critics) have blamed the BJP for fueling anti-minority and anti-Muslim sentiments in India,” she said.

In Bangladesh, thousands of people protested outside Dhaka’s main mosque, Baitul Mukarram, after the Friday prayers, chanting slogans such as “Boycott Indian products” and “Hang those who insult our prophet”.

Small processions also were reported from other parts of the capital against the Hindu nationalist party official’s remarks against the prophet.

While India is scrambling to contain a diplomatic storm in many Arab and other Muslim-majority countries over the anti-Islam remarks, the government in Bangladesh – home to the world’s fourth largest Muslim population – has not yet condemned Modi’s government.

This silence of Prime Minister Sheikh Hasina has been criticised by the opposition parties and the people.

Asif Nazrul, professor of law at Dhaka University, told Al Jazeera the Bangladesh government did not speak because it did not want to “antagonise India at any cost, even if it involves the honour of Islam’s prophet”.

“Sheikh Hasina’s government stays in power without people’s mandate and a large section of people in Bangladesh believe India has a role behind it. So naturally, the Hasina administration would not do anything that would earn the ire of the Modi government,” he said.

Anti-India sentiments in Bangladesh over the treatment of India’s Muslim minority has grown since Modi came to power in 2014.

On Thursday, Bangladesh’s biggest non-political Muslim platform, Hefazat-e-Islam, held a big rally in Dhaka in protest against the comments about the prophet by BJP officials and called on the government to send a formal condemnation message to the Indian authorities.

Speakers at the protest also called for a boycott of Indian products until the country abandons its anti-Muslim policies.

Thousands of people also rallied in Pakistan on Thursday and briefly scuffled with police in Pakistan’s capital, urging Muslim countries to cut diplomatic ties with New Delhi over the remarks by two BJP officials that were derogatory to the Prophet Muhammad.

The scuffles between demonstrators from the Jamaat-e-Islami Pakistan party and police erupted when the protesters tried to march toward the Indian embassy in Islamabad but were stopped by police.

Massive Protest in Pakistan’s Every Districts against the blasphemy of the Prophet Muhammad (PBUH), by the people affiliated to ruling party (BJP) in India.#وَرَفَعْنَا_لَكَ_ذِكْرَكَ pic.twitter.com/EDzleCFguq

In Pakistan’s largest city of Karachi, dozens of people took to the streets, demanding the government shut down the high commission of India and a boycott of Indian products.

“The government must shut down the Indian high commission in Pakistan and boycott India economically,” protester Shabana Ummul Hasnain said.

Pakistan and India have a history of bitter relations. Since they gained independence from British rule in 1947, the nuclear-armed nations have fought two of their three wars over the disputed Himalayan region of Kashmir, split between them but claimed by both in its entirety.

Faisal Mahmud contributed to this report from Dhaka, Bangladesh. 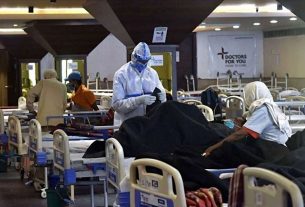 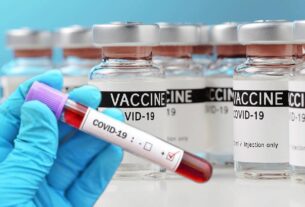