According to UN estimates, approximately 4,000 individuals around the world contract HIV every day, and the organization asked countries to increase funding for disease prevention and treatment access.

The organisation tweeted, “Progress in the reduction of new HIV infections is slowing & every day 4,000 people become infected around the world. @UNAIDS urges countries to increase investment in HIV prevention & access to treatment.”

As per the most recent information available from UNAIDS, progress against the HIV pandemic has stalled during the last two years of the coronavirus pandemic and other worldwide crises. As a result, resources have dwindled, putting millions of lives in danger.

Progress in the reduction of new HIV infections is slowing & every day 4,000 people become infected around the world.@UNAIDS urges countries to increase investment in HIV prevention & access to treatment. https://t.co/R1y9tXnOEV pic.twitter.com/T8tkiN4bBE

As per a new report released, In Danger, prior to the International AIDS Conference in Montreal, Canada, the smallest annual fall in new HIV infections since 2016 occurred between the years 2020 and 2021, when the number of infections fell by 3.6 per cent globally.

The UNAIDS data showed, new HIV infections are currently increasing where they had previously been declining in Asia and the Pacific.

However, as per a press release, annual HIV infections have increased in Eastern Europe, North Africa, and Latin America. The rapid development seen in eastern and southern Africa in previous years will be significantly slowed in 2021.

Despite better HIV medication and resources to prevent, identify, and cure opportunistic infections, around 650,000 people died due to AIDS in 2021.

The report outlines that if things continue as they are, there would be more than 1.2 million new HIV infections annually by 2025, while the UN member states have established a goal of less than 370,000 new infections. 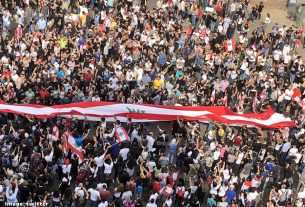 Lebanon’s biggest protest in years: call for the ‘fall of the regime’ in Beirut (VIDEO)